Real Madrid collapses shockingly in Catalonia, Barca is far ahead 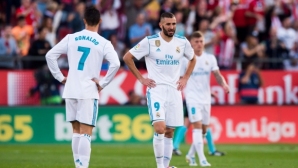 Spain`s Madrid Real Madrid lost 1: 2 to the absolute debutant Girona in a match of the 10th Circuit of Primera. Zinedine Zidane`s team led on the break after Isco (12), but in the second half the Catalans managed to turn in with Kristian Stuauni (54) and Porto (58). The second goal remained very serious suspicions of ambush. According to Spanish judge analysts, the ambush is also inaccurate. After the defeat, Zizou`s guys are already behind with 8 points behind Barcelona.


Cristiano Ronaldo and Karim Benzema led the White attack, backed by Isko. Ashraf Hakimi again got a chance at the rebuilding Daniel Kravahal. Pablo Machin set 5-4-1 with Cristian Stuwani in the top position. The hosts started loudly and squeezed their prominent rival. In the eighth minute gironde filled out, Porto moved to the ball with Kiko Cassiya - the offensive footballer could not reach the net. In the 11th `red and white` created a new danger, the ball hit the far beam after attempting to center Pablo Mafeo. There was a lightning counter and a goal in the Los Merengues column. Sergio Ramos found Benzema in the center, he searched Cristiano on the left, and the Portuguese won the position for a shot. After the strong shot, goalkeeper Bono knocked the ball right at the feet of Isco, who could not be wrong - 0: 1. Despite the result, the Catalonians continued to play with self-confidence. The shares of Kiko Cassia hide dangers, but they missed hits. At the other door Cristiano had two wonderful positions in the 23rd and 26th minutes. First, he received the ball at the border of the penalty area but did not find a gap for a shot. In the second situation, Benzema centered on the right, and CR7 turned the ankle into the penalty shot and pointed to the right corner of the goalie without hesitation, but the guard squared and screamed.

In the 31st Ronaldo handed to Benzema in the penalty area, the French shooter flipped a defender and shot from a small angle - above the beam. The repetitions showed that there was an ambush. Girona`s 35th efforts have been halted again by the militia. After centering to the left, Portu diverted his head to the far corner, the goalkeeper did not move, the ball hit the beam just below the junction, then went dangerously close to the goal and did not find anyone in the net. In the 42nd Rafael Varan put his foot at the exact moment when Pere Pons jumped alone against the goalie. As a whole, the Madrid people did not find their game in the first part and the luck covered them in the important moments. On the break Nacho Fernandez replaced Varan probably because of the Frenchman`s trauma. In the 51st Isco reached the ball of the outfit itself and centered, the ball was close to Benzema, who instinctively directed with his heel, goalkeeper Bono lightly knocked the ball and sent it into the hand of Ady Benitez. The defender`s hand was a staunch and the ball did not go towards the goal, so Judge Hernandez Hernandez decided he did not score a penalty.

In the 54th Gironde they came to a deserved equalizing goal. The `white` defense was not well built, Stutai took over the ball, crossed between Nacho and Ramos and fired hard at a close angle of 1: 1. Four minutes later, the hosts hit?