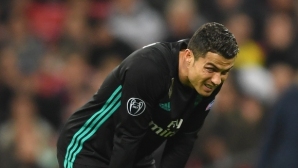 Real Madrid`s leader Cristiano Ronaldo indirectly criticized the White`s transfer policy after a 1: 3 victory over Tottenham in the Champions League last night. It`s no excuse, but Pepe, Hamse and Morata make us stronger. The young are the future, but they are still young and the lack of experience is noticed, the Portuguese told BeIn Sport in the Wembley mix.

It is bad that we lost because we are accustomed to winning. It`s not what we wanted, but football is changing. I`m sure things will change. I do not think things are so bad or that we play so badly, he assured.


When they led us 3: 0, it was really a big hit. The first goal is ambush, the second is also ambush, CR7 said. Asked if he would sign a new contract, Ronaldo cut off: No, I have four years to finish the contract.