AS: 10 unrelenting penalties for Real Madrid! 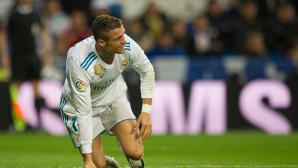 Spain`s Real Madrid`s champion has been suffering from referee mistakes since the start of the season. AS journalist Thomas Roncero, who does not hide his bias in the White House, gathered all the mistakes of the judges (in his opinion) to the detriment of Los Merreges since the beginning of the season in Primera. The facts show that Zinedine Zidane has not received a penalty yet. Ronsero numbered 10 (! ) Who had to be appointed.

In his view only last night at `Wanda Metropolitano`, referee Fernandez Borbalan has passed three penalties in Atletico`s penalty area. At the end of the first half Luca Hernandez broke Sergio Ramos`s nose and did not even play the ball. That could mean a penalty and at least a yellow card for the French defender. In the 83rd minute Cristiano Ronaldo tried a penalty in the penalty area and the ball met Diego Godin`s hand. She was not tightly packed and actually stopped the ball from the door. According to the journalist, the third penalty is a battle in the penalty area, when Fernando Torres acts illegally against Nacho Fernandez. Chronologically, the series of Judge shoots began in August against Valencia. For Roncero, Daniel Pareho held Karim Benzema in the penalty area, but the referee then (the same Borbalan) did not stop the game. Real makes 2: 2 with the `bats` and loses two points. The next round, Theo Hernandez, claimed a penalty after fighting Chema. According to Ronserro, this is a non-penalty penalty by referee Hernandez Earnades. Santiago Bernabeu`s meeting ends at 1: 1 - new scoring points. The shocking loss of the `white` at home against Bethes also did not go without any controversy. Ronserro argues that in this game `los verdiblancos` have committed three penalty shoot-outs. First, Havi Garcia seems to kick Marcello`s ankle. The second position is after Cristiano Ronaldo`s strike to the door, after which Garcia stops the ball of the goal with a hand that is not tight against the body. For the third penalty, Ronaldo is in a hug with a rival in the penalty area. In the 11th round Real Madrid won 3: 0 against Las Palmas, but there are two overturned positions in the penalty area of ??the `yellow`. In the first case, Lemos is deliberately late and improperly obstructs Nacho`s path. In the second situation, Mitchell stumbles on Casemiro. The balance of these matches points to nine missed points, almost as much as the lag behind Barcelona.

To these penalties, Ronsson added both goals in the Madrid network, which should not have been honored. Jorge Molina scored a prominent ambush. Real, however, took the three points in this fight with Getafe. Girona`s loss a few weeks ago came after Porto`s goal of ambush. The situation is really thin, but repetitions show that the goal is invulnerable. Ronsson finishes his report that Real Madrid has something to improve in the game, but the judges` mistakes must also be mentioned. How will you comment?