Real Madrid have received quite generous gifts from Audi (photos) 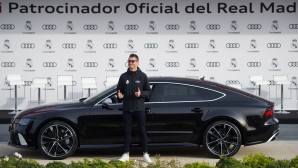 While the Thanksgiving Day was celebrated in the United States yesterday, Spain came at the time of the year when Real Madrid players received their new luxury cars from the sponsor of the Audi team. The German company began its cooperation with the `kings` in 2003 and has since then given some of the most talented footballers in the world its latest models every year.


The most popular car among European champions this year was the newly introduced Q7 (Casemiro, Gareth Bale, Luka Modrich) but more bold guys who chose special versions such as the E-Tron Quattro and the diesel monster SQ7 TDI, wished by Kiko Cassia.
Madrid star Cristiano Ronaldo bet on RS7 Sportback while manager Zinedine Zidane gets keys for gray RS6 Avant. Madrid`s new favorite Marco Asencio showed modesty and chose the most affordable car in the list provided by the Audi S5 Coupe. The most expensive and luxury vehicle -;white R8 Spyder - he drove the `bloody captain` Sergio Ramos.

Karim Benzema, who hit his Audi RS6 at the end of September, has chosen his Audi RS 5 Coup u0026 eacute;
Only a month ago the German company organized a similar event in Ingolstadt with Bayern Munich players, whose automobile preferences could be said to be quite different from those of the Spaniards.