It is clear:Ronaldo gets the Golden Ball of the Eiffel Tower 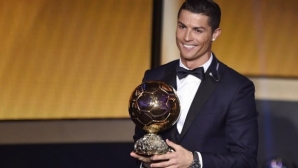 Cristiano Ronaldo will receive the Golden Ball on Thursday at a glamorous ceremony at the Eiffel Tower in Paris, categorically claims the Catalonian edition of Mundo Deportivo. Naturally, it`s the French Football Prize, which will be the fifth for the Portuguese superstar of Real Madrid, and so will be equal to Lionel Messi.

We recall that on October 23, FIFA handed Ronaldo his version of the best player award during the year. As it is known, last year France and FIFA have divorced and ended the practice since 2010 to give a single Golden Ball.


France, in general, gave its prize at the end of the calendar year or even the following January, but due to the Ronaldo`s thickened program with Real Madrid, it was decided that the ceremony would be earlier this time. On the 13th of December, the white ballet will play its semi-final at the World Club Championship and the 7th day is selected to ensure Ronaldo`s presence in Paris as the 6th Real Madrid accepts Borussia (Dortmund) at SantiagoBernabeu, and the 9th - Sevilla in the Primera Liga. The organizers from France football will not make such a magnificent ceremony as FIFA, which has bet on Hollywood style but will be glamorous, writes Mundo Deportivo.