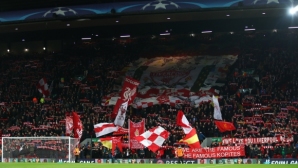 For the first time in the history of the Champions League, a country will have five representatives of the eighth finals in the strongest club tournament. This pride fell to England after Manchester City, Manchester United, Liverpool, Chelsea and Tottenham overcame the group stage. Even more impressive is that for the first time since the 2006/07 season four clubs from this country have topped their respective teams - in this case Tottenham, City, United and Liverpool, with only Chelsea behindRoma in Group C, and with an equal to the wolves asset and only lagging behind in direct duels. Especially significant is the achievement of the London spurs, because they beat the first position not any, and the current 12-time European champion Real Madrid.


Another record in the group stage is related to the goals scored - for the first time in history, the number of hits is more than 300, namely 306. Liverpool`s record has been a record high of 21 goals in the groups. Roberto Firmino`s six goals are a club record with Liverpool`s team.

Cristiano Ronaldo became the first player in history to score in each of the six clash of the group stage. This slipped to Neymar, who did not score for PSG in the last game, lost by Bayern Munich (1:3). Josep Guardiola became the sixth coach in history with at least 100 matches in the Champions League, joining Sir Alex Ferguson, Arsene Wenger, Carlo Ancelotti, Jose Mourinho and Mircea Lucescu. The draw for the eighth finals is Monday at 13:00. The first matches are on 13/14 and 20/21 February 2018, and the revans are scheduled for 6/7 and 13/14 March 2018.