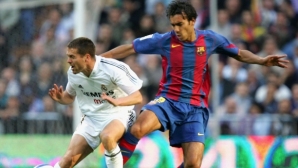 Before each big clash, a huge interest attracted the opinions of former players from both clubs. This is the case with former Real Madrid striker Michael Owen, who expressed his opinion before the game and announced the 11 best players for all time of El Classico.


Owen first gave an estimate of the outcome of the match. Few would be surprised, but the 38-year-old former footballer predicts success for the white ballet by 2:1. The argument that gives the win to los blancos is the household factor and the mobilization of players in a white team before a clash like this one on Saturday.
The former player also remembers the time he has been on the pitch of one of the biggest competitions in world football. He stresses how hard it is for either team to lose such a derby. By way of example, he defeated Noe Camp - 0:3;a match in which Michael appeared in the 50th minute. Owen also recalls Santiago Bernabeu`s 4-0 victory when he is the champion of the Madrid.
At the door of the selection, the Englishman puts the legend of Real Iker Casillas, with whom he was a teammate.
The troop of the former Liverpool and Manchester United player is filled with two other names he played in Madrid;Roberto Carlos and Sergio Ramos. In defensive terms, Carles Puyol has left his most striking impression, so he is among the 11 players in the mixed team.
In the middle of the field, the Englishman is mainly relying on Catalonians. The legendary tulip Johan Cruyff, the Dutchman Michael Laudrup and Barcelona`s aging star Andres Iniesta. The only Real Madrid midfielder Owen is the white coach Zinedine Zidane, with whom he was part of the first Galacticos project by Florentino Perez.
Offensive Michael does not choose for himself. To better recognize the two winners of five Golden Balls -;Cristiano Ronaldo and Lionel Messi. The company will make the Argentinean icon Diego Maradona.
El Classico will be played on December 23, Saturday, at 2 pm The championship leader is the Catalonians with 6 points ahead of Atletico Madrid. Real are fourth with a match of less than 11 points from their eternal enemy.