PSG stakes on Madrid against its success in the FFP 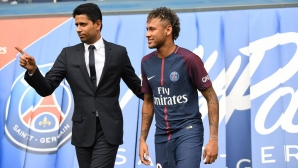 Trapeza -;a crystal and steel building that pore the air of Emil Zola Boulevard in Boulogne is the discreet seat of Bein Sports and Paris Saint-Germain. The climate in the club`s cabinet, which has conducted the most ambitious growth and investment project in the football industry over the past decade, seems to indicate no tension less than two weeks before the first eighth-finals of the Champions League against Real Madrid. The face of one of the most important club leaders, who says after anonymity, does not tell him:We have to win for all the reasons you can imagine.
When Jassim Al Thai -;Prince of the Emirate of Qatar, decided in 2011 to buy PSG, his idea was not just to establish the club among the leading players in European football. His plan was to rise to the top, surpassing the other five top five names in the UEFA rankings:Real Madrid, Barcelona, ??Bayern (Munich), Juventus and Manchester United.

The vision of Jassim and his man in Paris -;Sheikh Nasser Al Kelafifi, who holds the office of President -;pointing to a golden age. The first objective was to build a competitive team based on the fact that Paris is the most cosmopolitan and populated capital of continental Europe, therefore the presence of the largest set of young talents together with Sao Paulo. The second goal was winning the Champions League -;with the trophy alone would be financial strength and prestige.
The lapse of last season`s eighth rounds against Barcelona was the biggest turning point for the Qatari`s dream. That 6:1 on Camp Nou -;recurrently recalled by the French press humiliation with the Spanish term la remontada (b. triggered a revision of the strategy. Senior coach Unai Emery insisted that in order to climb the last step to the elite PSG needs top class players. One Zlatan Ibrahimovic is not enough, although there are excellent units in each unit. He needed a major favorite for the Golden Ball according to the mentor, because only that would give the team the necessary character to fight with the biggest ones, without suffering from the heights. Both Jassim and Nasser fully agreed with the diagnosis.
The three concluded that only a slamming blow could break the WS model with the closed loop of favorites and winners, a true oligopoly. For the transformation of PSG into a real grand, progressive work from the bottom up was not enough. Instead of relying on the development of the school or the attraction of young footballers who fit a certain style of play and way of work, one or more figures from the top level of football should be taken.