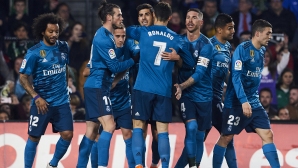 Real Madrid and Betis played a spectacular match in the 24th round of the Primera Division in Sevilla, which scored eight goals, and the winner was the `white ballet` who won the 5:3 success. The duel went through incredible twists. The first guests were rejoicing after Asensio opened in the 11th minute. The hosts equalized in the 34th minute by Mandy, and three minutes later they led after Nacho scored an own goal. After the break, Sergio Ramos equalized for Real, and the `white` came back in the 59th minute when Assenio again scored. Cristiano Ronaldo scored a fourth goal in the 65th minute and everything in this match seemed to be over, but the incongruous hosts returned the tension five minutes before the finish by Sergio Leon. However, Karim Benzema, as reserve, returned calm to the guests in the added time. The bad news for the people of Madrid is the injury of Marcello, who has forcibly left.