Nothing to do with CF:Cristiano slipped the unbeatable Real M 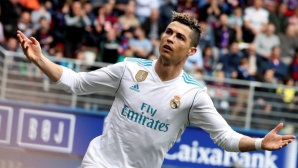 With two goals from Cristiano Ronaldo, Real Madrid won a 2-1 win over Aubar in a 28th round of the Primera Division. The Premier did not show any of the class we saw against Paris Saint-Germain in the Champions League this week. The citizens of Sofia were disappointed with their game and were lucky not to lose.

The Basques dominated, they had many more situations, but they made two mistakes that CR7 punished. He found in the 34th minute, Ivan Ramis equalized in the 50th, and in the 84th Portuguese brought the success to Real. Thus, Ronaldo already has 14 goals and two assists in the last eight matches of his team in La Liga, and has led Lionel Messi by number of hits since the start of the season - 34:33. With this victory Real came close to 4 points to the second Atletico Madrid, who played with Celta on Sunday. Lloyd Blancos coach Zinedine Zidane made four changes in the squad compared to the PSG fight. Gareth Bale, Luka Modrich, Isko and Toni Kroos took the seats of Matteo Kovacic, Karim Benzema, Marco Asencio and Lucas Vasquez. Stolichani returned to the diamond scheme in the middle of the field. Before the match Los Merenges had only three wins in their last nine away games.


Issbar is the eighth in the table and is not far from Europe. Kicke led the attack of the hosts.


The hosts worried Stolichans in their first attack seconds after the match, and three times the defenders before Keylor Navas had to intervene. By the 5th minute Ebarr had three more goals. Surprisingly or not, the Basques continued to play the game in these early minutes while the champions were content to wait patiently and search for Bale with far-fetched appearances.

In the 17th minute things became dangerous again for Real, but Kayor Navas came forward boldly and cleared his head. Two minutes later, the Costa Rican guard again intervened decisively after Kicke`s distant shot. There was an unpleasant moment in which Rafael Varan and Kike struck their heads, and the medical teams had to enter. The defender of Real did not manage to get into the situation and was replaced by Nacho Fernandez shortly afterwards.

In the 24th, the hosts requested a penalty shoot-out against Casemiro but the referees did not see the situation well, and as if the Brazilian`s hand was outside the penalty area.

In the 29th Daniel Carvajall committed a violation, after the center from which Joan Jordan was left alone in the penalty area but did not hit the target. Seconds afterwards, Bale received a yellow card for a dangerous entry, and it was already clear that Real`s had serious problems at the moment.

And then Zidane`s team came to their first goal position. Bale came alone against Marko Dmitrovic, but his shot was blocked, then Cristiano slowed to shoot in the empty door and his home football player took the ball. In the 33rd minute, however, the winner of the Golden Ball demonstrates his power. He took advantage of Modrich`s excellent shot and scored 1-0.


But the hosts responded with two more dangerous attacks.

Ebbar started his stomach and his second half