Isco with great chances for a home win against Juve 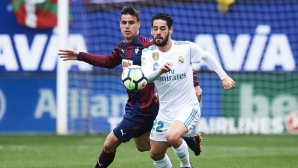 Spanish media expect Real Madrid midfielder Isco to be in the starting lineup in the first 1/4-final clash of the Champions League against Juventus. White No. 22 did not play in last night`s game with Las Palmas. According to AS, the Malagasy midfielder will fight against Lucas Vasquez, Marco Asencio and Gareth Bale. Vasquez and Asencio did not play at Gran Canaria, but the Welsh hurray showed it could be very useful for Madrid. Ten captains are clear:Keelor ??Navas, Daniel Carvajal, Rafael Varan, Sergio Ramos, Marcello, Luca Modric, Casemiro, Toni Kroos, Karim Benzema and Cristiano Ronaldo.

Ramos and Isco trained well today after complaining about muscle problems during the week. Both will have no physical obstacles to enter Zinedine Zidane`s starting lineup.

The first dispute between last year`s finalists is Tuesday on the Apennines.