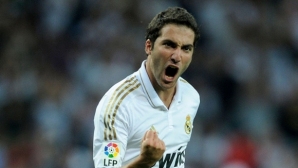 Juventus striker Gonzalo Iguaine did not have a good relationship with Real Madrid`s President Florentino Perez on his stay with Santiago Bernabeu. This was shared by the father of the footballer who was asked for his opinion before the important match between Juve and the white ballet of the Champions League 1/4.

Today, the bianconers take their renowned rival to Allianz Stadium at 21:45. in the first match of this elimination phase.

Peres was the reason Gonzalo left Real. Gonzalo definitely did not like him. I think Karim Benzema, Cristiano Ronaldo and Iguaine could do a lot of things together. Obviously, much more is needed than players at this level. Two months ago everyone criticized Ronaldo. Benzema is constantly attacked, Jorge Iguayin started for Cadena Ser. For the past 10 years, Ronaldo and Lionel Messi have dominated the Golden Ball prize, while the best strikers in Europe are Benzema, Igguin, Robert Lewandowski, Essonne Cavani and Luis Suarez. They all suffer criticism, `added the Argentine star`s father. It`s not easy to play against Real Madrid. They have a wide and very talented staff. Unfortunately, Juventus has players who are injured, but Massimiliano Allegri is an intelligent coach who can cope with the problems against Real, completes Iguayin`s father.