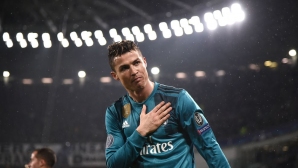 33-year-old Cristiano Ronaldo made a big match for Real Madrid in a 3-0 win at Los Merreges against Juventus in Torino in the first 1/4-final meeting of the Champions League. The Portuguese made the first two hits in the game and assisted Marcelo for the third goal. The CR7 goals also brought him new records. The Portuguese is the only footballer to score in 10 consecutive Champions League games. Cristiano is also the player with the most hits of the 1/4-final phase in the history of the tournament - 22.