Former head of Real: Ronaldo will go to Chelsea 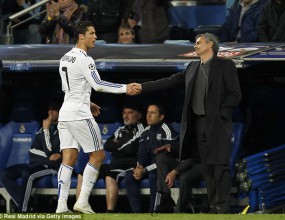 The former president of Real (Madrid) Ramon Calderon is confident that Cristiano Ronaldo will follow Jose Mourinho.
"Ronaldo said he was sad at Real at the beginning of the season. I think the relationship between the players and the current president Florentino Perez is not good, because he does not like players who succeed. Оnly three are the teams that can attract Cristiano because of his high price. These are Manchester City, PSG and Chelsea. All will become clear in the next few weeks, "said Calderon.
It is not clear what thinks Ronaldo . He always referred to Manchester United, where he played before moving to Real Madrid, his home, and Sir Alex Ferguson is seen as his father. The retirement of the Scot however changed the things as Ronaldo would find virtually unknown atmosphere at "Old Trafford".