They chose De Hea for the best in Manchester United 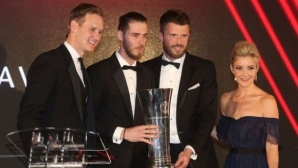 Manchester United goalkeeper David De Hea was selected as the best player in the club for this season. The Spaniard received the award, named after the legend Matt Busby, for a record fourth time. So he surpassed by this indicator Cristiano Ronaldo, with whom he had three distinctions so far. The winner is determined in a poll among fans of the team. They again appreciated the brilliant rescue of De Hea during the season, which brought many valuable points to the Red Devils. The Spaniard received more votes from Romulus Lukaku, Nemanja Matic, Jesse Linggard and Ashley Young, who were behind him on the leaderboard. It`s hard to say what Manchester United means to me. It is unbelievable to wear the team of this club because of its fans and because of its great history. It was difficult at first, but I believed in myself and continued to work hard. I want to thank everyone. I did not expect to win even one prize, and now I have four. Thanks for everything, De Hea said in receiving the award.