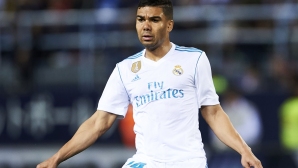 Real Madrid midfielder Casemiro believes a 2:2 draw against Barcelona is a fair result. According to him, referee Alejandro Hernandez did not influence the final outcome of the match, although he could have judged a penalty for the offense against Marcello in the second half. `I think we controlled the game with a man more, but Messi`s class made the difference for 2:1. ` Ronaldo`s lack of somewhat disturbed the rhythm of our game in the second part, but the result was fair, though it could beHowever, I would like to make it clear that the guilt for equality is not the judge, although there are some controversies, and everyone can be wrong in favor of one or the other team, so we should not talk about the referee, We saw two teams looking for victory, one against the otherThe best team in La Liga When you bring the team to Real, the goal is always to be on top It does not matter that Bar