Real to Cristiano:Find a buyer 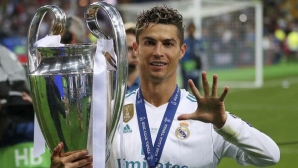 Real Madrid superstar Cristiano Ronaldo has received a `green light` from the club to look for a new team. The Portuguese wants a new contract with a big increase in salary, but the management of Los Blancos does not plan to offer him for his advanced age. `Cristiano hinted he had played his last Real Madrid match after the Champions League final against Liverpool:1) and since then speculation about his future does not stop.

The Spanish media have revealed that a meeting between CR7 agent Georges Mendes and part of Real`s bosses was held earlier today and it was once again clear, that Ronaldo will not get the desired contract, which comes as a confirmationwe have the record of the record that the split between the two sides is inevitable.

Although his redeeming clause is worth