Diego Simeone:I do not want to say that the departure of Cristiano makes us favorites 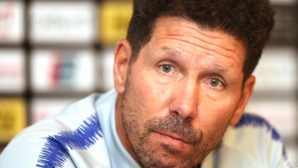 Atletico (Madrid) coach Diego Simeone has welcomed the new addition, Jelson Martins, who arrived in the free transfer team after the problems in Sporting (Lisbon). El Chollo spoke to journalists on this and other topics in Singapore, where the Sofia residents arrived for a pre-season tournament. `I`ve watched it several times very carefully, and I`ve been watching it a lot in Europe for the past year, giving us power on the right side like a wing, and it could also be part of an attacking trio, which changes places, `said the happy coach. Martins, part of a group of 9 people, crushed his contract in June. In May, the fans of the team rushed to drill and hit Bas Dost, and the problems deepened after the president took the side of the fans. Earlier today, Athletic announced Martins for a new contract with a 6-year contract. He is 23, has 19 matches for the national team of Portugal. The other four new players in the team are Toma Lemar from Monaco, Rodri de Villarreal, Johnny Castro from Celta Vigo and Antonio Betan from Real Betis. A large number of players did not arrive for the pre-season tournament in Singapore because they are on holiday after the World Cup, where they played for their countries. The tournament is attended by three teams and the other two are Arsenal and Paris Saint-Germain. Arsenal and Atletico play first Thursday, and four days later the Spaniards face Paris Saint-Germain. `I believe that the youngsters and the reserves will be presented at a high level and will replace the absentees fully. ` `We know how important a break is after the World Cup, we will not look for any apology that we have not been to the best`` `` The new additions are really important, but it is also important that we have retained important players such as Antoine Grossman and Jan Oblak. They are part of the future of the club. I do not want to say that leaving Cristiano Ronaldo for Italy will make us the favorites of the title. We grow as a club and as a team. The new stadium and new investments will give faith to our supporters that we are approaching Real and Barcelona, ??`the Argentinean added.