Azar:It is a pleasure to put you among the three best, but now I just score goals 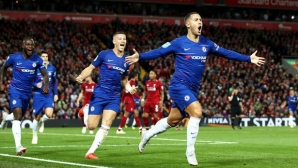 Chelsea`s great star Eden Hazard, who scored six goals in his first seven games, including a brilliant strike against Liverpool during the week, admits he feels good about the fact that currently analysts and fans talk of him as one of the threebest players in the world. Ross Barkley and John Terry even shared the view that the Belgian was not just at the level of Lionel Messi and Cristiano Ronaldo, but he is even number one at the moment. This is nice I`m trying to do what I can when I`m on the pitch I`m the same player I used to be two or three years ago Now I just put in and that`s why everybody talks to me I`m intop 3. It is a pleasure to be there, I just want to continue in the same way . . My goal is to win something every year I want trophies Last season we won the FA Cup We know that winning the Premier League will be difficultbecause Manchester City and Liverpool are very good teams and have very good players but we will do our best. It is not important how many goals I will score, but you know me - I do not care, I just want to enjoy football and win matches, `said Azar, for whom Maurizio Sarri said he can score 40 goals this season. `I think the victory over Liverpool for the Cup is also important for Saturday`s match, and after winning West Ham, we have won against one of the best teams in the world at the moment, and we are ready for the match tomorrow, ` added the Belgian.