Alegri:If there was a VAR, they would not chase Cristiano 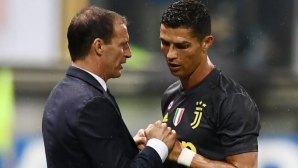 Senior coach Juventus Massimiliano Allegri praised the victory over Valencia with less and said Cristiano Ronaldo`s controversial red card would be canceled if the judge could use the VAR system. We did it really well. Even before Ronaldo`s expulsion, we had a few clear positions, and then we deserved to lead. Only at the end of the game we gave a little more space to the hosts, but this is normal given the accumulated fatigue. Wojciech Schniche had little to do before the penalty in the last few minutes, said Allegri. Miastaya is not easy to play, Valencia is an aggressive team and the crowd is very helpful, but we have managed both with the pressure from the stands and with the hosts` attacks. The red card did not change much. I think if the judge had a VAR available, he would have made the right decision. It`s disappointing to stay with someone less in the Champions League in a similar incident. We risked losing an important match and, furthermore, Cristiano will be punished, so we are in the right to feel injured, `said the mentor of Juve. He added that he was impressed by Federico Bernardesky`s performance and stressed that Fiorentina`s former footballer is already an important figure in the team and can be relied on in the big games.