Triumph, but with a bitter taste 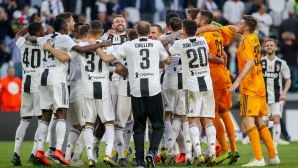 On Saturday night, Juventus did something unique, winning for the 8th consecutive and 35th time the Scudetto of Italy. Eight other titles have not been won by any other team of the Apennines, and in fact this has not happened in any of the other major championships in Europe - England, Spain, France and Germany. Over the last eight years, `Old Lady` has become a true hegemon of Botusha and one of the strongest teams in the world. Yet another Torino triumph has a slightly bitter aftertaste. The reason for this is that the team again failed to achieve the most anticipated goal of all the typhoons - winning the Champions League. In recent seasons, Juve twice touched the trophy in the most commercial football tournament, but both times there was little to triumph in the end. The club bosses estimated that the team needed a big star, a leader and last summer was attracted to `Mr. Champions League` Cristiano Ronaldo. The Portuguese had a good season, became the goal scorer of the team and played a decisive role in some hot matches. He has made stronger campaigns in the past, but he can hardly be blamed for Juve`s collapse in Europe.

The arrival of Cristiano Ronaldo at the Allianz Stadium was a big surprise to most football professionals. It brought great enthusiasm to both the fans and the players of the club. Some of them, who were hesitant to leave, decided to stay so they could play side by side with one of the greatest football players of our time. The puzzle seemed fine and everyone was laughing that this would be Juventus` year. But it also charged the team with great expectations, which he subsequently failed to live up to. Let`s try to explain why.