In Barcelona:The numbers do not lie - Messi is in front of CR7 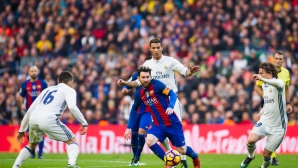 Along with the race between Cristiano Ronaldo and Lionel Messi on the football field, it runs between media in Madrid and Barcelona. Catalan Sport reports that the Barca striker continues to outperform his opponent in Real. In the current campaign, the Portuguese is unstoppable with 37 goals in 35 games, averaging 1, 05 goals / match, while Leo has 0, 81 goals / away (35 in 43 games). The numbers do not lie:the CR7 remains far from those 1, 21 goals / match (73 in 60 games) that Messi registers in the 2011/12 season, Sport recalls. During the campaign in question, Ronaldo also scored 1, 09 goals / match, but did not reach the Argentine achievement.


The Barcelona star is more effective than its rival even in the Champions League, where Cristiano is a record-breaking hit. There the European`s coefficient is 0, 79 against 0, 81 of the South American. But from the start of 2018, Cristiano is reborn with 1, 61 goals / match (21 in 13 matches) while Messi has 0, 88 (16 in 18), not knowing what will happenuntil the end of the season.