Cristiano:I continue to prove that I am the best 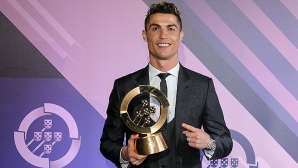 Megastar Cristiano Ronaldo is still convinced that there is no stronger footballer in the world than he is. I always say I`m the best because I believe it and I prove it on the pitch, he said last night at the ceremony he was awarded the Portuguese Football Player Award for 2017.

The moment is great and I want toshares his joy with my teammates, `continued the Real Madrid striker. - The past year was exceptional for me both on an individual level and on a team basis. It was historic to Real. Five trophies, a fifth Golden Ball, a second FIFA Player Award, three children for three months, which is also a record. I dedicate the prize to my four children.