Benita:I knocked the ball, the penalty is absurd 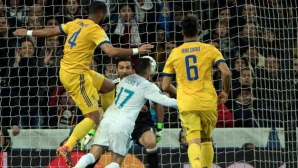 Juventus defender Medi Benatija was caught in the most controversial moment in the match between the old lady and Real Madrid in the 1/4-final in the Champions League. The hosts of Santiago Bernabeu received a penalty at the very end of the match after a clash between the Moroccan and Lucas Vasquez in the penalty area. The defender, however, is categorical that he has played with the ball in this situation and the penalty is absurd.

We are sad because we played the game the way we wanted. Last year, the same thing happened with Bayern (Munich). Real Madrid is a great team but always when there is a touch in the penalty area, they get a penalty and Ronaldo scores. I surrounded Vasquez and knocked the ball. He just fell because he had nothing else to do. You can see how the ball bounces off my leg and changes the direction of movement. To judge such a penalty is absurd. In this case, we are a victim of the circumstances, but at the same time we are proud of what we showed in this game, Benita said. He also commented on the expulsion of goalkeeper Canluigi Buffon, who asked the judge to explain the penalty. The judge must explain what the rules are, because if the captain can not talk to him after a penalty has been given, then who can? asked the defender.