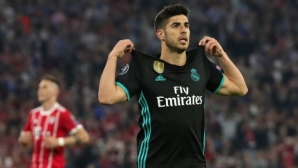 Real Madrid won the first 2/1 match against Bayern Munich from the 1/2-final in the Champions League. The white ballet triumphs as a guest at the Allianz Arena and made a big step towards the Kiev finals. Yoshu Kimih led the hosts ahead in the 28th minute but in the 44th Marcelo equalized, and in the 57th minute Marko Asencio brought a complete turn to the guests. The Bavarians, however, have something to regret because they missed a lot of situations in the game and deserved to achieve a better result. The fact that Arjen Robben and Jerome Boateng had forced the duel for the injury in the first half of the season and became one of the most important players of the German Grand Prix, who entered the infirmary, contributed to this development of the match. The hosts came out with Robert Lewandowski at the top of the attack, with Franck Ribery, Thomas Muller and Arien Robben in support of him.


For Real, the trio in attack was composed by Cristiano Ronaldo, Lucas Vasquez and Isco, and Luka Modric, Toni Kroos and Kazemiro were in the middle of the pitch.


The match started swiftly and in the 3 rd minute Bayern`s players demanded a penalty shoot-out for Daniel Carvajal in the penalty area but the ball hit him rather in the shoulder and the judge judged he would not point the white point. Unfortunately for Munich, Arien Robben suffered an injury and had to be replaced in the 8th minute by Tiago Alcantara. The first straight shot to one of the two doors was Rafinha in the 19th minute, but the ball fell right into the hands of Kayor Navas, who confidently caught.

In the 24th minute, Rafinha`s serious mistake in the field allowed Karvahal to send a powerful shot to the door, but Sven Ulrayh saved. In the 28th minute Bayern opened the score. The Germans organized a swift counterattack on the right hand side. Kimih got on speed and came out in firing position, then from a small corner managed to send the ball into the net. Just minutes later Bayern set up a new interesting attack as Lewandowski fell into the penalty area after a clash with an opponent, but this time the referee did not see any reason for a penalty.

In the 34th minute Franck Ribery made an unforgivable pass. He was taken alone to the goalkeeper on the left, but took the ball very gaily and gave it to the rival. But the problems faced by Bayern continued to accumulate. A second player of the hosts left a forced game because of an injury. Jerome Boateng was replaced by Niklas Zuule.


At the 41st minute after corner kick Lewandowski headed for Mats Hummels, who tried an acrobatic blow close but he crossed the crossbar.