Gerrard:Salah is the best in the world 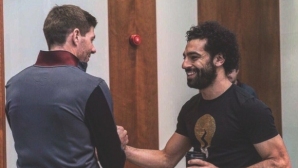 Former Liverpool captain Steven Gerrard has complimented the current star of the `red` Mohammed Salah. Last night, the Egyptian played another brilliant match, scoring two goals and making two assists, and Juergen Klop`s team defeated Roma with 5:2 in the first semi-final of the Champions League.
`He`s the best football player in his career, and it`s hard to compare him with Lionel Messi and Cristiano Ronaldo, who have been fashioning for years, and have maintained incredible levels, but Salah is the strongest player in the world. I doubt that, `said Stevie G, addressing Salah.


Another legend of Merseyside - Robbie Fowler, also commented on Anfield`s fight. `Liverpool`s magic game, but at the end it was a bit naive, but if it was 5:2 before the game, 99% of the fans would agree without even thinking about it, ` Fowler said.