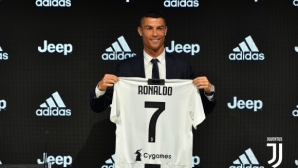 Cristiano Ronaldo`s first day in Juventus gave a clear message to everyone:there was a football player in Italy that no one had ever seen before. None of the football legends on the terrain in Italy can be compared to Cristiano. Michel Platini and Diego Armando Maradona were footballers from another planet but from another age. Ronaldo (Phenomenon) was an extraterrestrial player, but he did not play so hard with the media as Cristiano did. In recent years, the big champions have been far from Serie A. German journalists at J Medical admitted in a straightforward way:Here we are because Cristiano Ronaldo is a person who is far above the sport. It is a brand, an icon, a brand everyone knows around the world. In the Bundesliga we are missing a person like him. Do you know what kind of footballer he took? The Portuguese, close to Jorge Mendesh, said they had received the first Ronaldo transfer information two weeks ago. We immediately thought that a wedding should be celebrated. Juventus is a great club, and Ronaldo only plays in such teams. Now Milan is in a crisis. All of us know only Juventus.

If in recent years the opinion of all was that the Italian championship is on the periphery of football, the dark period is over. Cristiano Ronaldo showed his personality in front of the cameras. If you look at it superficially, you will find yourself arrogant, but he has that body language that shows unlimited confidence in his own qualities:At all stages of my career, things went smoothly. I do not see why this will not continue now. I know very well how I train and in what physical state I am.

While Juve`s sports director Fabio Paratici repeated that after completing the deal with the CR7 his phone was mad at calls from the bikonkers, it was quite normal to notice that with the arrival of the Portuguese the bar in Juve was alreadylifted very high. In the summer of 2006, Juve was sent to Serie B. Now he attracts the best of all. It`s hard for CR7 not to cause envy and malice in humans. Which footballer would not go to argue with the club leadership for the 31 million Ronaldo will receive? Every normal would do it. But if you are in a team with him, then you have the great luck to be his teammate. It will make you better and train more and more to be at your level. You know it will help you win a lot and get more. This is the mission of Juve.