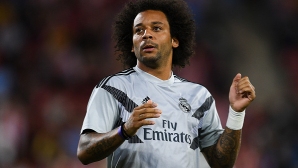 Real Madrid`s left back Marcelo has denied the rumors that he will pass to Juventus in the winter. In recent weeks, speculation on the subject has not stopped, highlighting Brazilian friendship with Cristiano Ronaldo, who already carries the old lady`s team. However, Marcelo has quite different plans.

I heard a lot of nonsense. But people know what the real situation is. I have a long-term contract, I`m happy in Madrid and I`m going to stay here for the rest of my career. I think Real is the biggest club in the world and I want to keep playing for him, Marcello told the Spanish TV club`s television.


Ever since I came to the team, I have always faced rumors at my address. It`s hard to explain and prove my desire every time, and it`s about making the most of myself for Real, `added the Brazilian, who then said flattering words about his young compatriot Vinisius. He`s another kid. When I came to Madrid I was 19 and I thought I was mature and experienced enough. Now I know it was not, but I have the same hunger for success. Vinisius is very young and still has to learn a lot of things in football, but he can do it from the best. Sergio Ramos and Casemiro are very helpful, I too. I am convinced that he is waiting for a glamorous career in Real.