Fernando Santos:We have to reach our Euro 2016 level 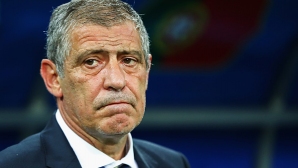 Portuguese coach Fernando Santos believes his team must demonstrate the form of the European championship two years ago to rely on success in the upcoming match against Morocco. Portugal finished 3:3 in its first World Cup 2018 match against Spain and is in a good starting position for the last two rounds in the group against Morocco and Iran. Morocco is one of the strongest teams in Africa, with a coach who is also experienced, has worked in many championships, Morocco`s team is tactfully literate, has very fast and technical players, will be a tough game, but morenothing in the group is decided, we have to show the level of the European Championship to win, `Fernando Santos commented.


During the press conference before the match, the breeder was overcrowded with questions about the mega-star of the team, Cristiano Ronaldo, among whom is he able to improve the record of 13 matches in the World Cup and where it is more useful - on the wing or as a centralstriker.


`Naturally, Cristiano is valuable for Portugal, but we have 22 more players, so far I have not seen a football player win a game, ` Santos said.