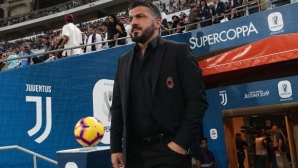 Milan coach Gennaro Gattuso has received a penalty of 1 game not to lead his team from the bench, a decision of the Disciplinary Committee of the Italian Football Federation has made clear. The reason was offensive to Judge Luca Banty for his job during the Juventus Super Cup of Italy, won by the champions with 1:0 through a goal by Cristiano Ronaldo.
Gatuso will not lead Milan from the bench in the next Serie A game - Genoa`s visit on January 21 from 4:00 pm in the 20th round.


Gatuzo was angry at the referees after losing to Milan, but his claims are not related to Frank Kessie`s red card, but to the use of VAR. He does not agree that in a situation of thin and controversial ambush the Rosoners have scored a goal but the side referee has raised his flag immediately, although the instructions are for the situation to be waited until the end and eventually then by VAR to judge the violationrules or not. Gattuso points out that this is exactly what happened to Juventus when the game lasted, and subsequently with the help of the technology the hunt was canceled.
Frank Kessie will also miss Genoa`s visit because of his red card against Juventus, and David Calabria, who has accumulated yellow cards, is the same.