On the break: Juventus 0:0 Milan 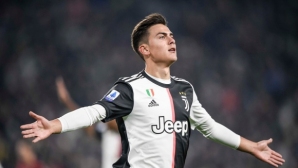 The Juventus team beat Milan 1-0 in the Serie A derby for the 12th round. The only goal was scored by Paulo Dybala in the 77th minute, for which he is the seventh goal in his match against the Rossoneri, who became the opponent team with the most championship losses at Allianz Stadium. The Old Lady has won all nine games against her current opponent at this stadium. The Bianconeri are also in a series of nine successes over the Devils in all tournaments.

Maurizio Sarri has made a number of changes to his starting lineup after a 2-1 win over Lokomotiv Moscow in the Champions League. In defense, the ankle injury from Matthias de Licht and Juan Quadrado returned, while in the midfielder the new names were three - Bles Matuidi, Rodrigo Bentacourt and Federico Bernardeski, who played behind the two strikers. They were Gonzalo Higuain and Cristiano Ronaldo, who has been complaining of knee pain in recent days.

Stefano Pioli again bet on the 4-3-3 scheme, after a 1-2 loss to Lazio gave Andrea Conti a chance at the expense of David Calabria. Injured Samu Kastiejo was replaced by the tram healed from his tram, whose attack partners were Hakan Chalhanoglu and Krzysztof Piontek.

The first shot of the match came in the 14th minute when Canluigi Donnarumma kicked Higuain`s short shot from close range. Milan replied with a header from Piontek in the 17th minute, but the ball flew out. In the 25th, a good attack by the Rossoneri led to a blow to the head of Lucas Packet, who was beaten in the corner by Wojciech Szczesny. In the 30th long shot Bernard`s shot went over the door, and shortly thereafter Theo Hernandez and Chalhanoglu also reported gaps. In the 45th, Hernandez fired a fresh shot, which was repulsed by Shchesni, and a minute later, the guard also dealt with a shot of Piontek.

In the 52nd minute, Bernardeski`s long-range shot went out, and shortly afterwards the same happened with a shot by Matthew. In the 55th Ronaldo was replaced by Dybala, who seconds later looked for a pass to Higuain, whose shot proved inaccurate. In the 58th Pientec tried a shot that was shot by Schchesni, and De Licht did not allow the striker to make an addition. In the 66th, Matthew shot dangerously, but the ball went over the door. In the 68th, Dybala made a long shot on the ground, but was easily rescued by Donorum. In the 77th minute, the Argentine whipped the opposing defenders and sent the ball into their net for 1:0.

The visitors threw themselves into the attack in pursuit of an equalizing goal, with Chalhanoglu reporting missing. The Bianconeri could have reached the second goal in the added time, but first Higuain did not find the target, and then Donoruma saved a shot at Dybala. However, the hosts kept their fragile advance and congratulated themselves on the success.

In this way, Juventus maintained its first position in the standings and after that round, collecting an asset of 32 points. Milan, however, are at a disappointing 14th place with just 13 points after their seventh loss since the start of the season.