Van Dyke: I`m proud to be in the company of two of the greatest in the game 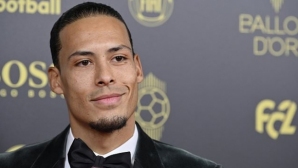 Liverpool central defender Virgil van Dyke, who finished second in the Golden Ball standings, uses social networks to reveal his thoughts and feelings after yesterday`s ceremony in Paris. In his address, the Dutchman congratulated Lionel Messi and expressed his admiration for him and Cristiano Ronaldo. Yesterday Van Dyke joked on the subject of the absence of the Portuguese, which apparently was not understood by CR7`s sister, who responded viciously to the Liverpool star. Van Dyke did not get into the controversy, but showed his respect for `two of the greatest in the game. `The defender also said he was proud of what he had achieved in the last year. Ronaldo`s sister replied to Van Dyke: Cristiano is already back from wherever you went
It was a huge privilege to attend the Golden Ball for 2019. I was flattered by the warm reception I received in Paris. I would like to thank everyone who made us feel so welcome.

step back and admire the greatness when it is before you. for another incredible year.

It was an honor for me to be nominated and proud to finish second and be in the company of two of the greatest footballers who have ever played - Lionel Messi andCristiano Ronaldo.

We have enjoyed some good battles this year and I hope there are many more in the future.

I am proud of the path I have taken. I hope he can inspire others to believe inthemselves and never give up on their dreams. I am hungry for even more success and will work as hard as I can to keep developing and striving for the best. 2019 has been great so far, but none of this would have been possible without the love and support of my family. Thank you for always being with me. I must also thank all my teammates in Liverpool and the national team.

Finally, I would like to thank everyone in the football world who sent me messages in support. It means a lot to me and my family. `