Georges Mendes: If Cristiano played in Real Madrid, he would have won the Golden Ball 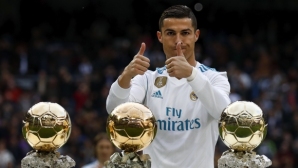 Cristiano Ronaldo`s agent Jorge Mendes is adamant that Juventus` striker deserved to win the Golden Ball for 2018 and 2019. The impresario added that if the Portuguese was still part of Real Madrid, he would have received the most valuable individual prize in football, which went to Luka Modric last year and this one to Lionel Messi. Cristiano has deserved to win the Golden Ball at least once in the last two years. If he played at Real Madrid, he would win it, but I think next year he can do it. Messi`s Golden Ball this year? To me, this is an injustice. Cristiano triumphed in the League of Nations and became champion with Juventus. However, he knows what he has to do and we will see what happens in 2020.


For me, Cristiano is the best player in the history of world football. Before Cristiano Portugal, they had never won anything. With him, they became European Champions and Champions in the League of Nations. At Euro 2004 they reached the final. He changed the world of football. We are talking about Portugal, a small country that has changed a lot thanks to Cristiano. Will he finish his career at Juventus? Yes, he can do it. He has a contract with the team and is happy working there under the guidance of a great coach, Mendesh said during the Golden Boy Award ceremony to another of his clients, Joao Felix.