Cristiano and Portugal board the train for Russia 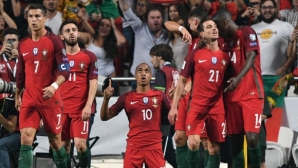 European Champion Portugal secured the 2018 World Cup after a 2-0 victory over Switzerland in a direct battle for the first place in the Europe-wide Qualifying Group C.John Juru`s own goal (42) and the fall of Andrew Silva (57) materialized the superiority of the lusitans.The Portuguese and the Swiss ended with equal points but the better goal difference of the seafarers brought them a direct ranking for the world finals.The bankers will be looking for a World Cup through the barrage screen.

Fernando Santos chose a 4-4-2 with Cristiano Ronaldo and Andre Silva in the lead.Guests were ranked 4-3-3.The meeting started with domestic pressure.The Western Iberians started out, but their attacks ended without a blow.In the 14th minute, the visitors made a dangerous move, sharpened by a double turn from the left, but the subsequent pass to the penalty point did not find an addressee.Two minutes later, Bernardo Silva entered the penalty area where he was blocked.

In the 32nd Bernardo Silva received a magnificent ball in the penalty area, chose a powerful shot to the near corner - the goalkeeper was in the right place and knocked in the corner.At the end of the half-time the Portuguese exercised pressure, which brought a goal.In the 42nd Elizabeth centered sharply on the left, and John Djourou had the malang to score an own goal after Joao Mario and Jan Zomer did not play the ball - 1: 0.

The second part began with the experience of Djerdan Shakuri tosurprise Rui Patricio.The technical midfielder struck a shot when everyone was expecting centering - the guards had enough time to react.In 55th Kristiano kicks over the 19 meter beam.Two minutes later, the Portuguese made a second goal.Bernardo Silva centered on the ground to the right, the ball went through a bunch of legs and stopped from the lower limb of Andrea Silva, who had the easy task of pointing in the guarded door of three meters - 2: 0.

In the 67th Shakiri shot from 23 meters, Harris Seferovic extended his legs and swerving the ball slightly to the side of the beam.In the 76th step he did not reach Cristiano to score on an empty door.In the 78th, the hosts claimed a penalty: Joao Mario was on the right, and the ball hit Duru`s outstretched hand after a ricochet in his leg.A minute later, Ronaldo jumped alone against the goalie, tried to flip it and lost the argument.By the end, the Swiss did not show anything worthwhile in an attack and did not question who would win.

Thus, Portugal is officially in the finals, and Switzerland will take part in the barracks lottery.

STATISTICS FROM THE MATCH