Kobe Bryant for Harry Kain: Very good, he can reach Messi and Ronaldo 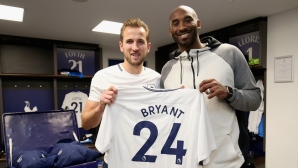 Former basketball star Kobe Bryant topped Totleyman scorer Harry Kane with superlatives. Cobi looked at Wembley`s troublesome Liverpool sparring success by 4: 1, then went to Tottenham`s dressing room and took pictures of players and manager Mauriceio Pocetino. I love football and I like to watch matches. The atmosphere of the stadium was great as did Tottenham, Bryant said.


Kane is good, very good. I like how he fights on the pitch. I think he can develop his qualities to an even greater extent. Harry is young and the weather is ahead of him. He can become like Lionel Messi or Cristiano Ronaldo as long as he believes in himself and continues to work hard. Then it is possible to reach their level, said the 5-time NBA champion.